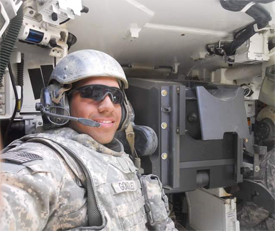 Ricardo in Amarah, Iraq as the Bravo Company
1st Platoons Medic in 2009 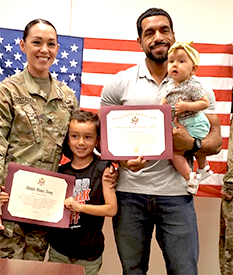 Ricardo's family during a promotion for his wife 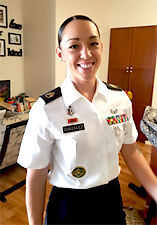 November 13, 2020 – November is Military Family Appreciation Month – a time for Americans to recognize and honor the family members who have made sacrifices to support their loved ones in uniform. Being a member of a military family isn’t easy. Military families deal with the stress that often comes with moving to new places, and sometimes to another country.

The sacrifices military families make sometimes go unnoticed by the rest of the world. Often, it’s forgotten that those who support their family members in uniform make sacrifices, too.

After three years of marriage and being away from each other for most of it, Ricardo and Crystal were finally able to be stationed together in San Antonio, Texas, when they learned Crystal was pregnant.

“We were both Sergeants when we found out we were pregnant,” Ricardo said. “It was really rough because we had different schedules and we were never home together. We became worried about what would happen to our son if we both were to get deployed. So, we had a long talk, and decided that I would leave the Army to take care of our son.”

“At any given moment, when it comes to serving, Crystal has to do certain things and that’s the way it is,” Ricardo said. “Being a military spouse means accepting things changing all the time, and realizing you can still serve your country without wearing the boots.”

According to Ricardo, you don’t need to be a part of a military family to help, however. If you know a military family, think of ways to help. Offer to babysit, cook a meal, or run a few errands. Even a small gesture can be a big help, and is always appreciated.

At the end of the day, Ricardo said if he could go back and do it all again, he wouldn’t change anything.

Ricardo and Crystal have been married for twelve years and are currently living in Hawaii with their two children.

This month – and all year – take a moment to say thank you to military family members. Let them know they are appreciated.